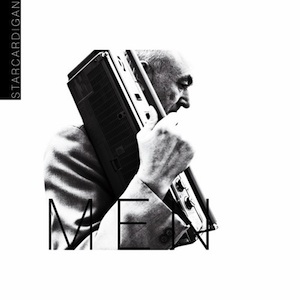 Starcardigan is an electronic rock band that formed at Vladivostok of Russia, now four members belongs to this group. Band members are Ivan Sosnovtsev on vocal & guitar, Aleksandr Frakiyskiy on keyboard, Alexandr Zolotukhin on drums, and Konstantin Loskutov on guitar. "Men EP" was released in summer of 2015, it is the second EP from Starcardigan. This release is the latest work of the band, it might be the uppermost sample to hear the sound of the current Starcardigan. By the way, Their debut EP "Tash" have been released in last year. (In the near future, this EP is going to be re-released from Mizou.) The sound of the Starcardigan is characterized in the fusion of electronic sound production and sentimental emotional melody. Electronic pop since the 1980s, a wide range of rock music from country to psychedelic, further techno and ambient, so many musical elements are combined, Starcardigan did create a unique beautiful and dreamy band sound. In the four songs have been recorded for this "Men EP", and you will be able to take listening to the abundance of style and the huge size of variety of the sound. A dignified strength, a floating of melancholic feelings, a frustration like standing hangnail, a pathos at dusk, a hope like shuguang of the sunrise. Starcardigan show us the various expressions in each song. They have a great drawer as the band. As there was U2 or Stone Roses in the era of the 20th century, it will become a sound like Starcardigan when the good meaningful music is expressed by young sense of this era. The popular music in this century continues to be updated on a daily basis. The responsibilities of such a big undertaking is on a highly creative young artists like the Starcardigan, it is no doubt. Artist: Starcardigan Title: Men EP Genre: Electronic Pop Country: Vladivostok, Russia Tracklist: 01. Signal 02. Men 03. Raw 04. Taxi Produced by Starcardigan Mix & Mastering by Dmitry Tsyganok, Alexandr Frakiyskiy and Ivan Sosnovtsev Artwork by Alexey Novikov Band members: Ivan Sosnovtsev: Voice, Guitars, Effects. Aleksandr Frakiyskiy: Keyboard, Software service Alexandr Zolotukhin: Drums Konstantin Loskutov: Guitar For more information www.facebook.com/Starcardigan vk.com/strcrdgn soundcloud.com/starcardigan www.youtube.com/channel/UCTyKKTQbp3V0jBpaAnKBvzg musicmama.ru/musician/STARCARDIGAN www.archive.org/details/mizou mini netlabel Mizou in association with Mizo! blog http://re-edit.at.webry.info
https://mizourec.bandcamp.com

Electronic music band Starcardigan is homeporting the city of Vladivostok, Russia. Members of the band name themselves as the floppy princes of the pacific electro music scene.

Men EP is the second release by Starcardigan. Four different songs are presented with sentimental character, those sounds so melancholic but powerful in the electronic music style.